In Irmo on June 15 at the town’s Community Park, the S.C. Juneteenth Freedom Fest honors the history of African-Americans in the state while remembering their efforts. 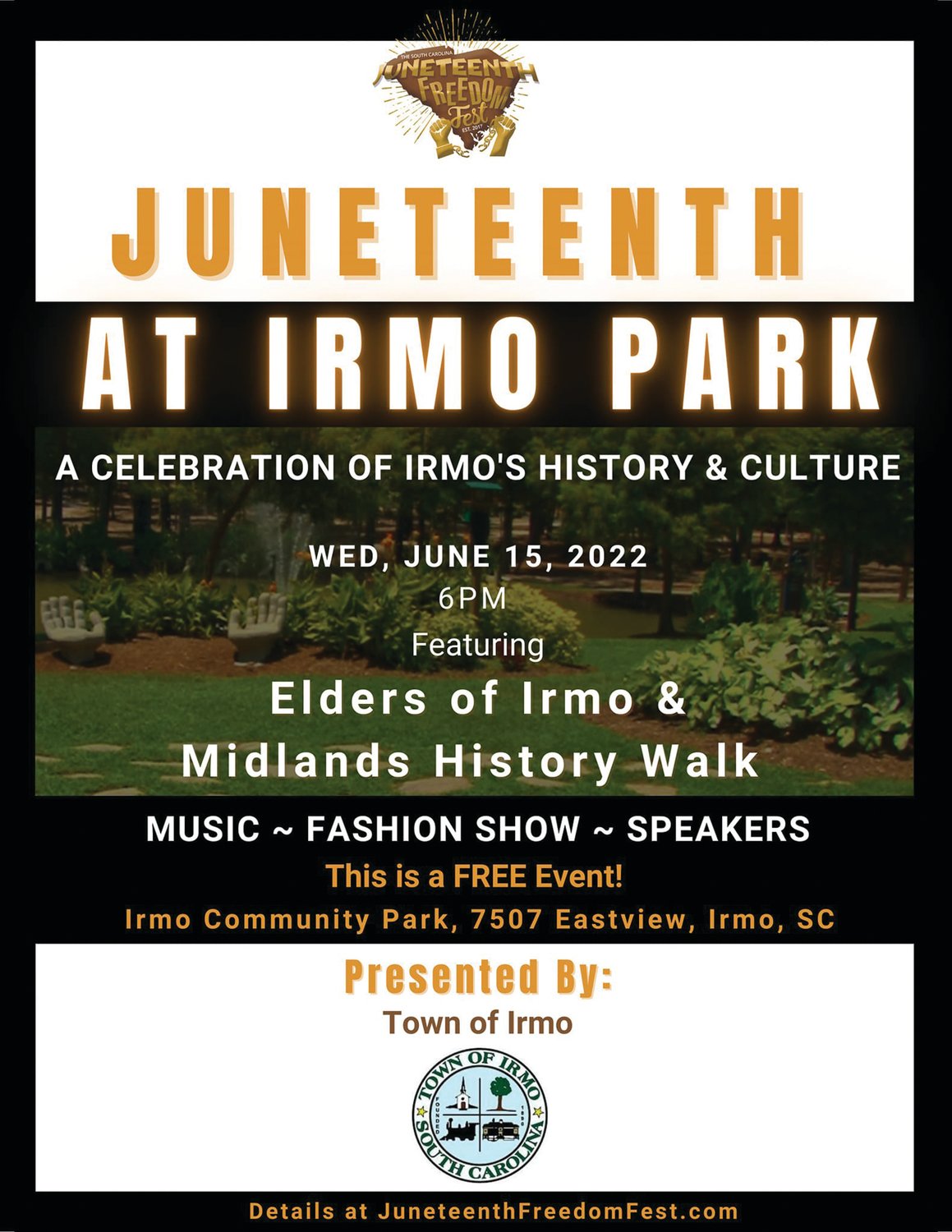 While Juneteenth has yet to become an official holiday in South Carolina, there will be celebrations across the state.

In Irmo on June 15 at the town’s Community Park, the S.C. Juneteenth Freedom Fest honors the history of African-Americans in the state while remembering their efforts.

The free festival kicks off at 6 p.m. and features the Elders of Irmo and Midlands for a history walk.

The Town of Irmo worked together with the Freedom Fest to host the annual commemoration. The history is provided through a self-guided exhibit, which includes presentations, artifacts and stories.

Juneteenth is celebrated each year on June 19, commemorating the emancipation of enslaved people in the country.

Founders Jamal Bradley and Rabiyyah Carmen Teborg began the festival and remembrance to acknowledge efforts of African-Americans in the state. Bradley is also on mission to help make Juneteenth an official holiday in South Carolina.

Bradley helped create a petition on change.org to show support for the bill to do just that and show the rest of the country achievements put forth by African-Americans in South Carolina. A bill making the holiday a state holiday has yet to be passed and enacted.

According to the petition’s page, Sen. Darrell Jackson states, “South Carolina has a long, painful history of slavery and racial discrimination, as well as a record of honoring the Confederacy with monuments and other official gestures. It’s time to shift the narrative away from idolizing racist slave owners and toward recognizing the accomplishments African Americans have made in the face of enormous adversity”.

The festival looks to bring positivity and light to various achievements and awareness to the painful past.

In addition to the history walk, there will be music, a fashion show and speakers.

The Irmo event on Wednesday is just one part of the Freedom Fest. There will also be a meet and greet at Steve Padgett Honda in Irmo on June 16 at 6 p.m. leading up to the Gala Noir at the Columbia Marriott on June 17, the festival proper at Benedict College’s Charlie W. Johnson Stadium June 18 and 19 (featuring such musical performers as Nappy Roots) and a Columbia parade on June 20. Info on these and Juneteenth events scheduled for June 10-20 are available at juneteenthfreedomfest.com/events.