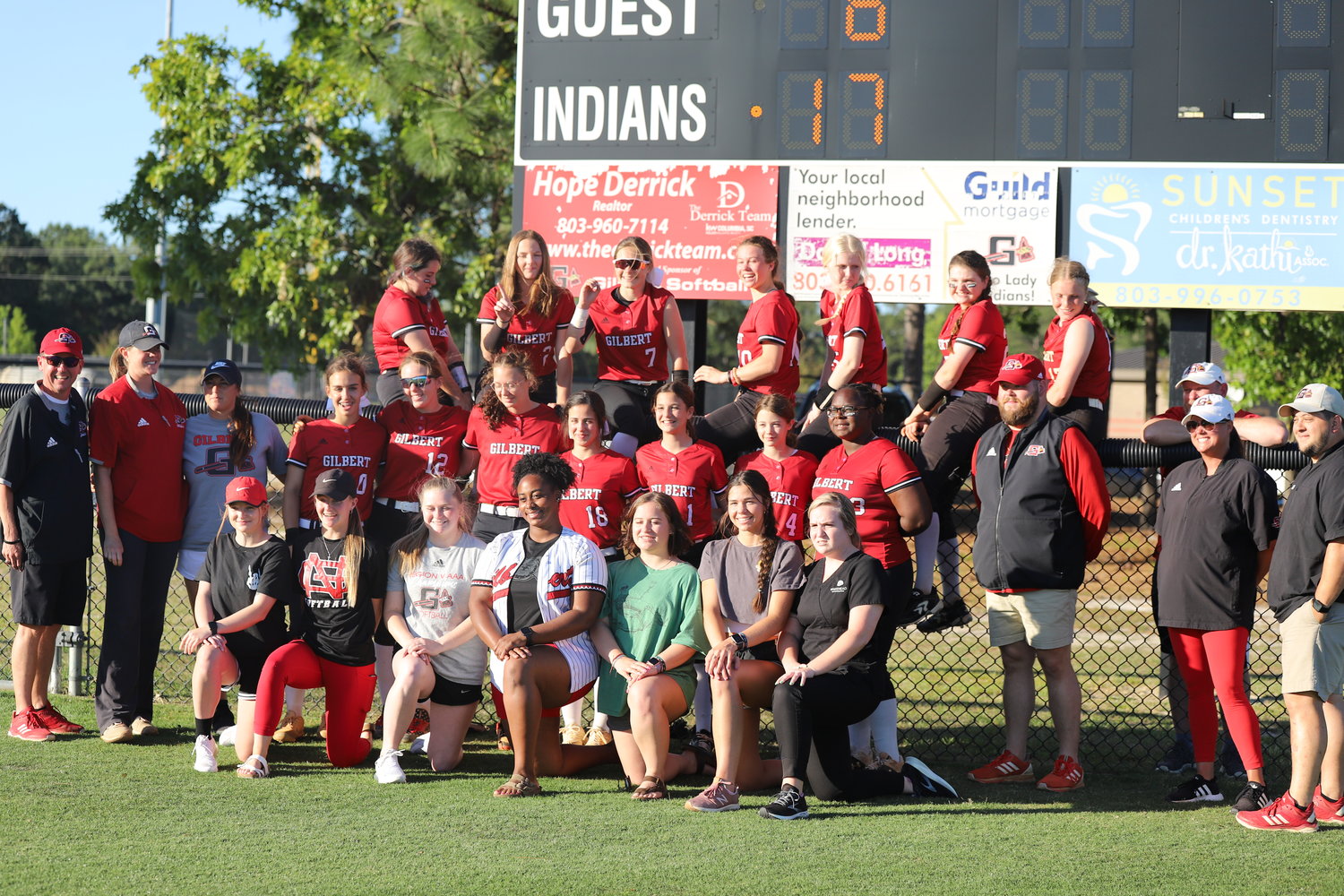 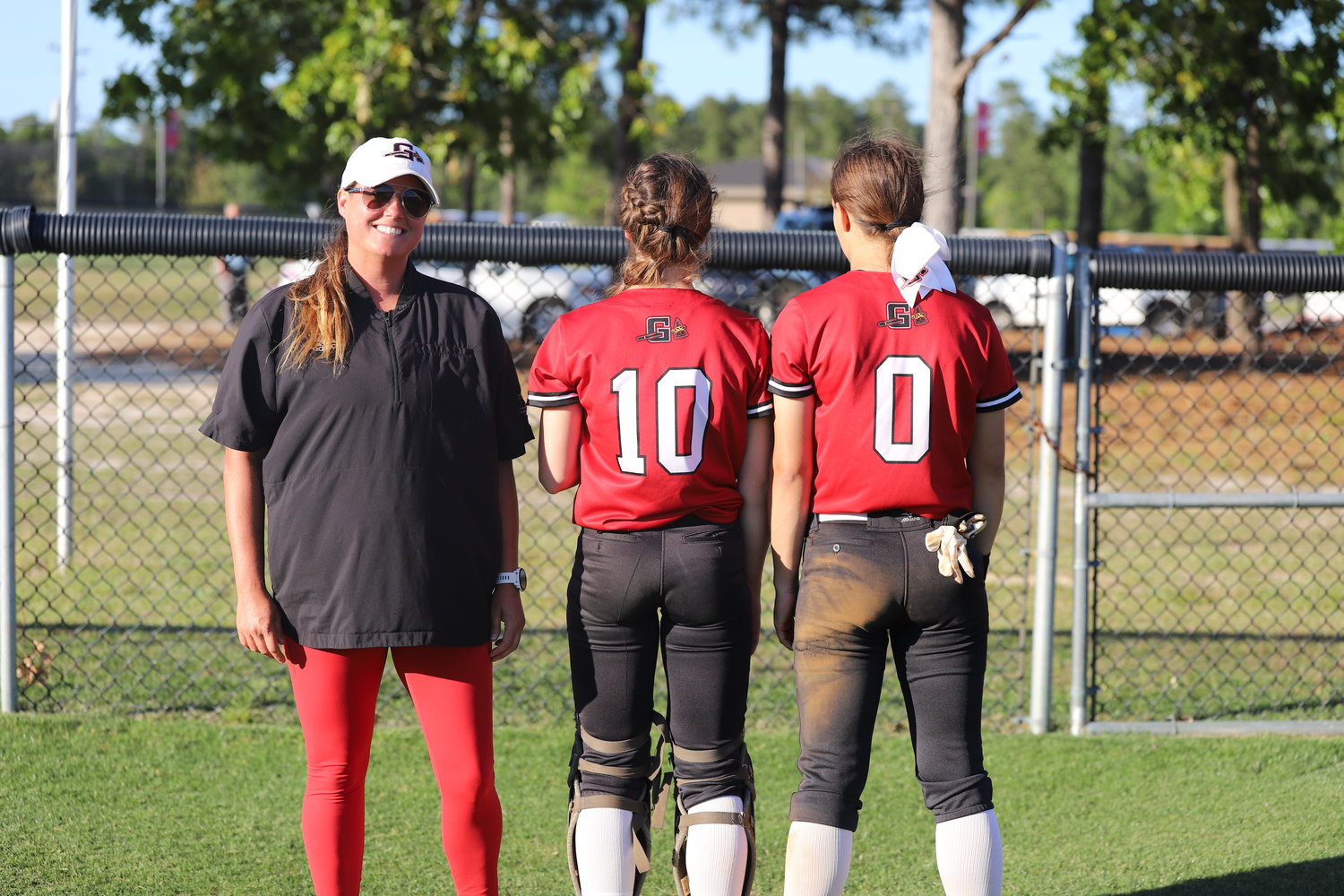 Gilbert head coach Sarah Minchew and Ayden Leaphart and Taylor Dreher lined up to form the number 100 as in career wins for their head coach.
Thomas Grant Jr. | Chronicle 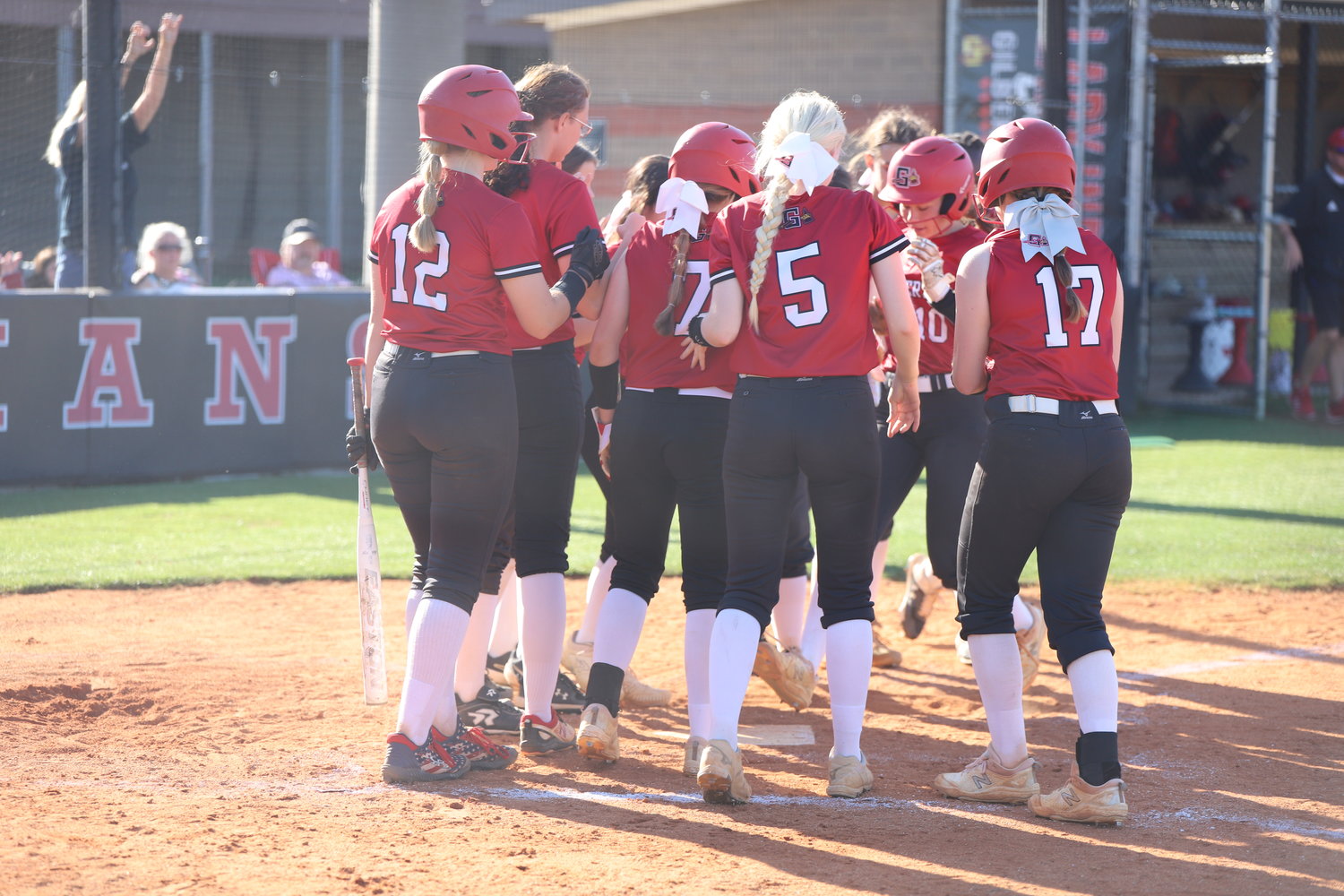 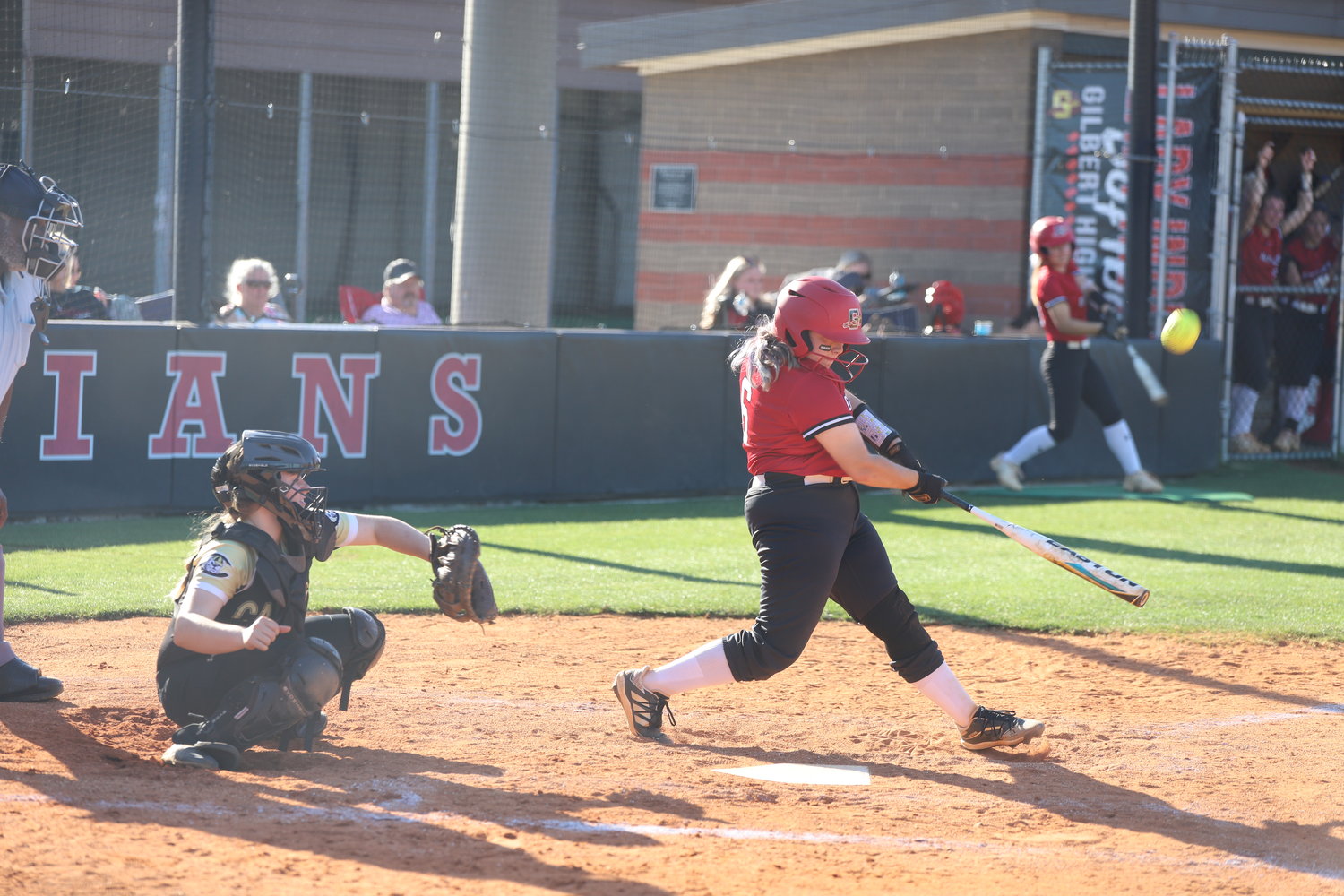 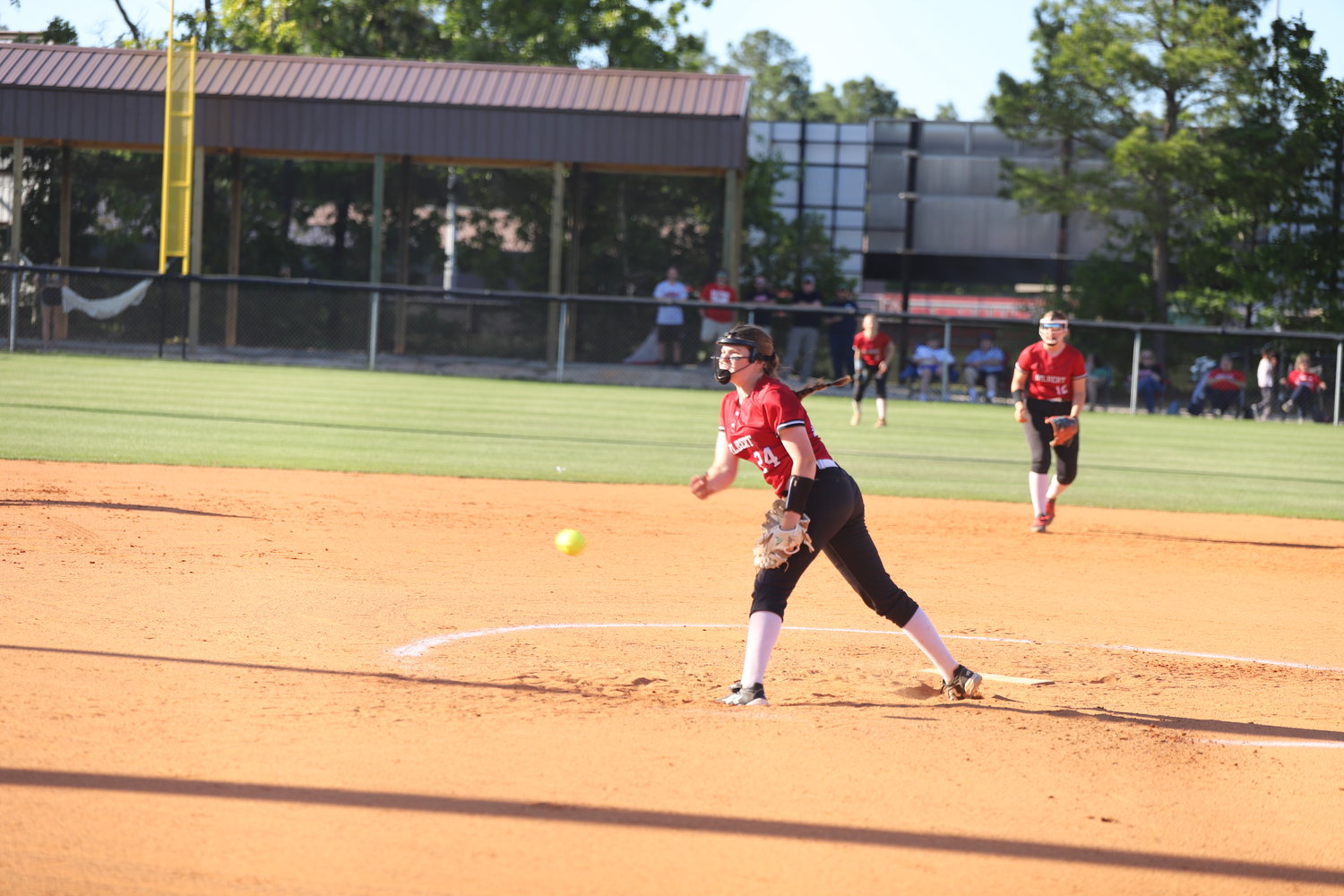 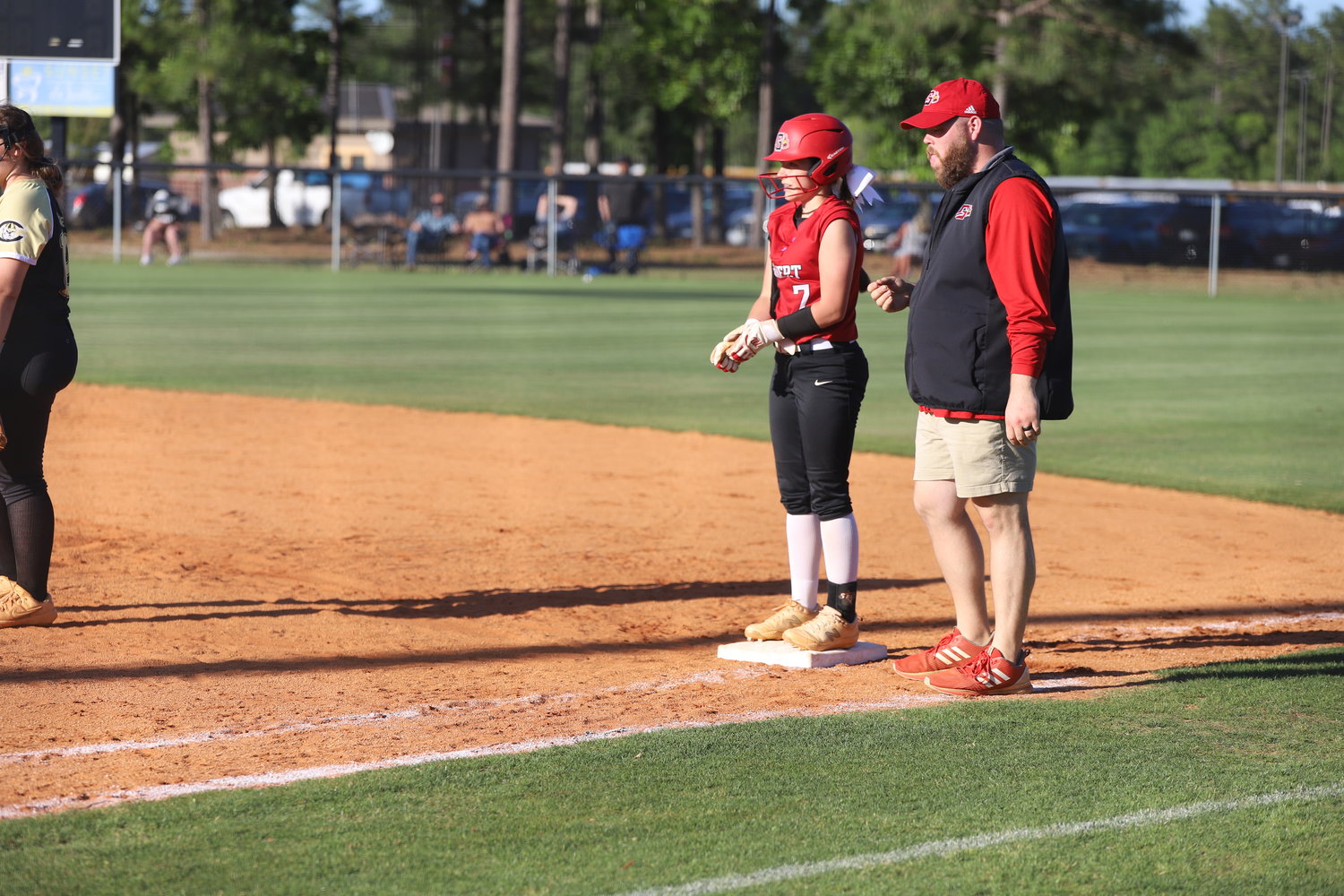 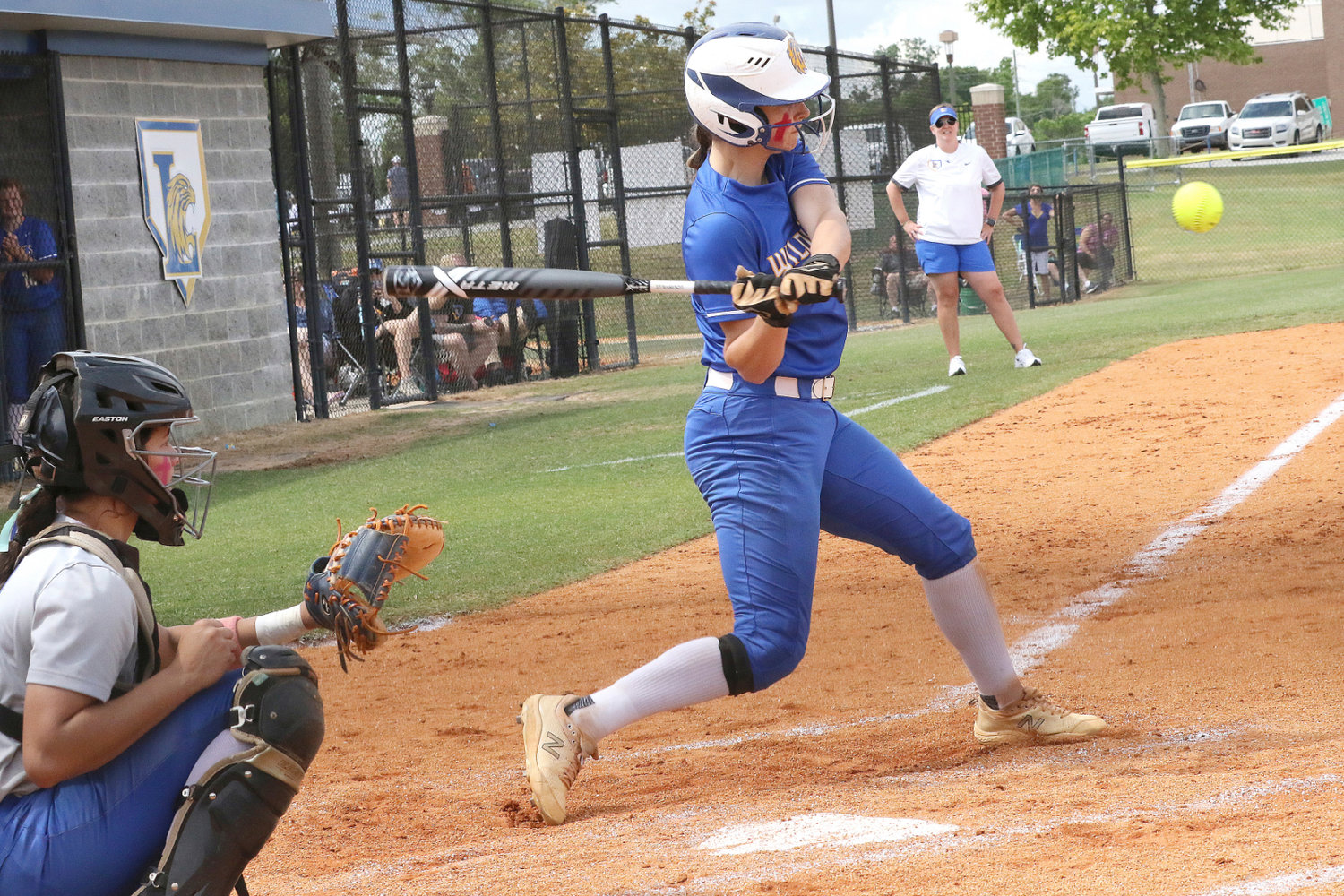 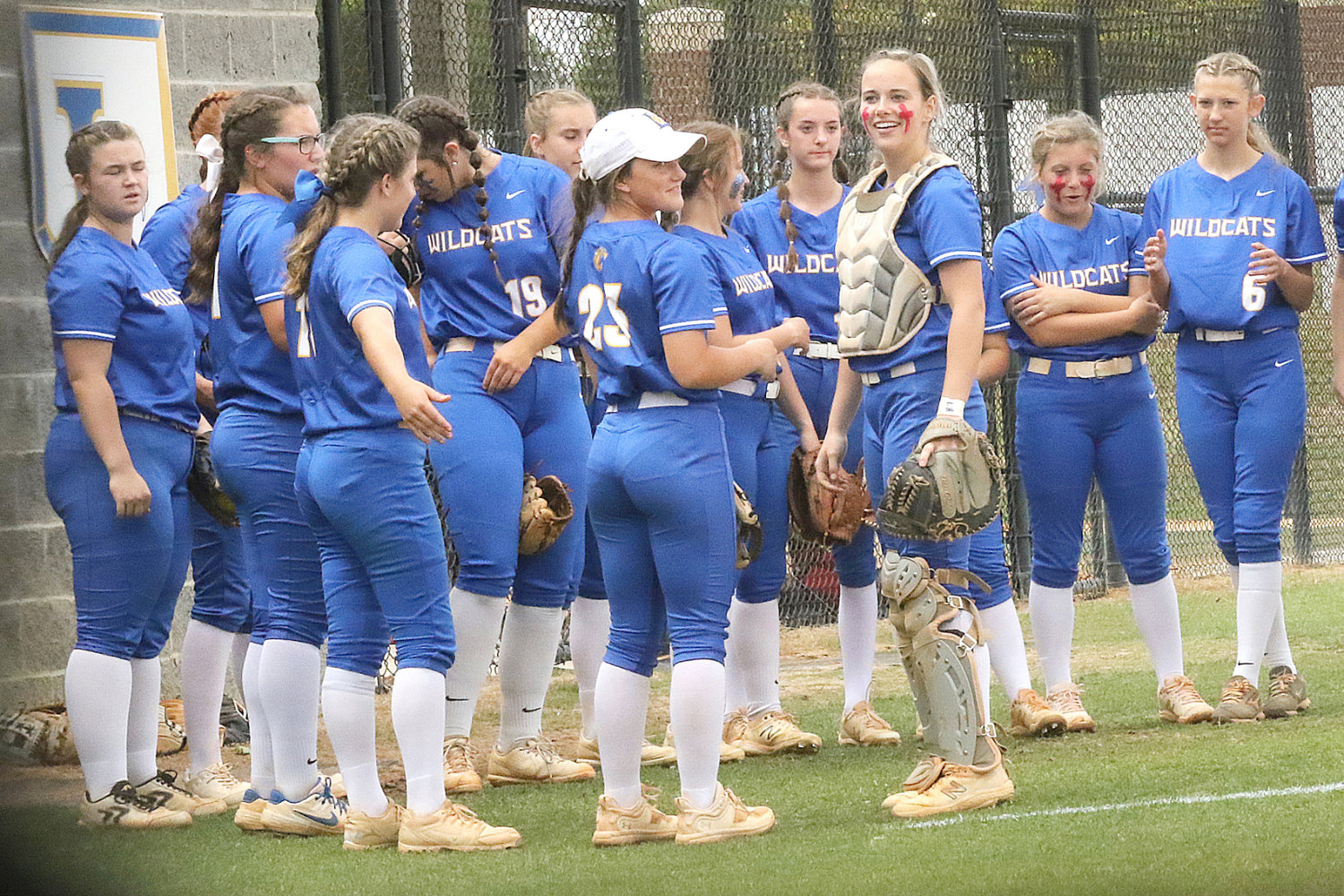 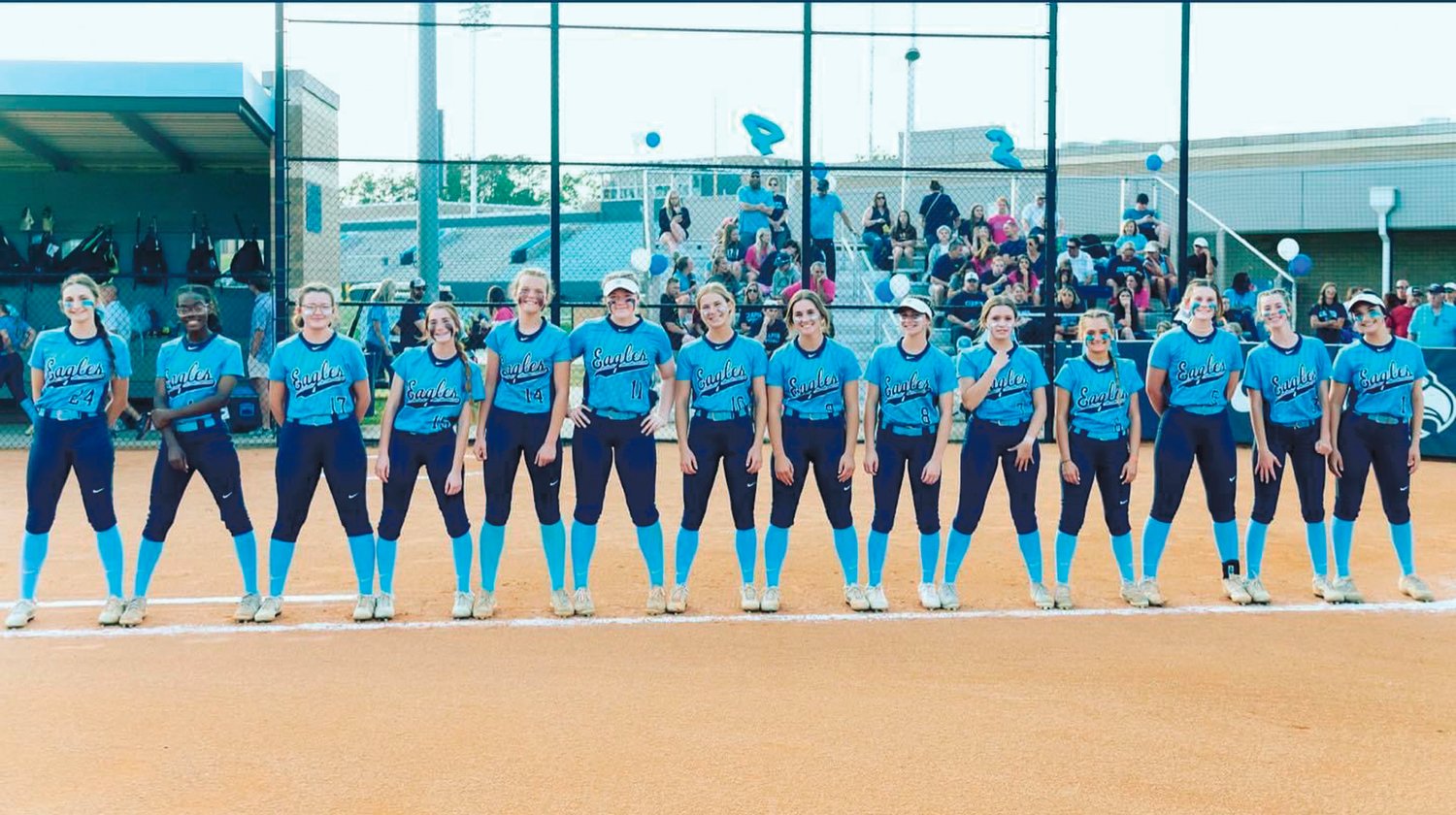 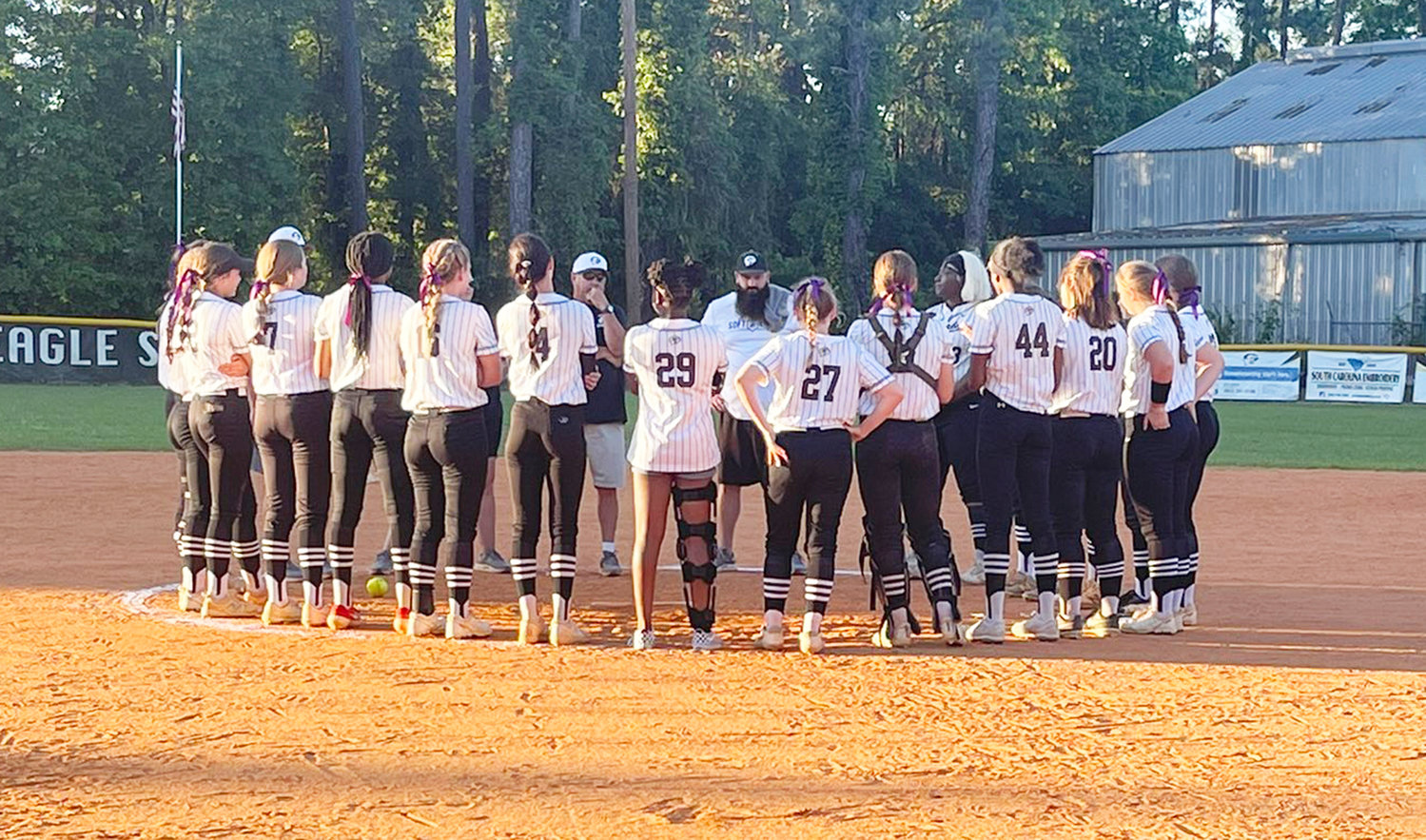 A quartet of Lexington County softball teams are headed to the next round of the South Carolina High School League playoffs.

The post-season continues Thursdday in baseball with six Chronicle Country teams opening the Upper/Lower State playoffs. All will start play at home except for Lexington which visits Region 5-5A rival Chapin. — Thomas Grant Jr.

The fifth year Lady Indians' head coach watched her team quickly erase a 3-0 deficit with 12 unanswered runs, 11 in the second inning. She then got to celebrate her 100th career win and another District Five title at the school.

Gilbert (21-3) will open play in the Lower State playoffs Friday against Aynor, who defeated Oceanside Collegiate 11-1 to win the District Six title.

"I'm very fortunate to have a great group of girls, a great group of coaches, fans, parents, everything," Minchew said. "So, it was a really nice day. It was great to have those two things come together."

After Camden opened the game with three runs, Payton Melinauskas scored off a sacrifice fly in the bottom half of the first inning to bring Gilbert within 3-1. The bats came away in the second inning, starting with a leadoff single by Carley Melton who scored on Isabella Adams' single to rightfield.

Abbie Marlowe then tied the game with a groundball single. As Marlowe advanced to second base, an errant throw was made by pitcher Madison Stokes which allowed her to score the go-ahead run.

Camden got a run back the top of the third as Jayden Kennedy scored off a throwing error by Dorgan at third base. She made amends with a leadoff single in the bottom half of the inning and scored on Taylor Dreher's home run over the rightfield fence to make it 14-4.

A Baty double put Gilbert up 15-4. Camden got two runs in the top of the fourth with an RBI single by Joy Buck, who then scored off leftfielder Payton Melinauskas' throwing error.

Melton closed out the scoring in the bottom of the fourth with a two-run single. Lakyn Swinford then retired the Lady Bulldogs in order to end the game. — Thomas Grant Jr.

Lexington (23-2) will open the Class 5A playoffs at home Friday versus Wando. The Lady Warriors defeated River Bluff 10-2 to win the District Six title.

Cane Bay cut the lead to 6-3 in the the top of the fifth inning. The Lady Wildcats answered back with seven unanswered runs over next two innings.

Sam Craig led off the bottom of the sixth with a RBI single. Gordon followed with a RBI double and she and Riley Ford scored off errors to make it 10-3.

With Livi Warren and Maggie Hinz on base, Gordon clinched the District Five title and cleared the bases with her second home run over the leftfield fence.

"It's super special," Gordon said. "We went into this game. We beat them on Saturday (10-0 in five innings), but we didn't go into this game thinking, you know, we beat them. We knew we had to come in here and we had to give it our all just like any other game like we had never seen them before and that's what we did." — Thomas Grant Jr.

Leah Cabe struck out four and closed out the game with six straight scoreless innings to lead the Lady Eagles to the Class 5A District Seven title.

The Lady Stags ended up leaving eight baserunners on base.

Chapin (20-6) will travel to Summerville to open the Class 5A Lower State playoffs. — Thomas Grant Jr.

The Lady War Eagles rode the wave of the long ball to a Class 2A District Two title.

Taylor Corley, Madox Long, Brooke Tranum and Brooklinn Thomas all homered in the victory. in addition to the two home runs, Corley struck out seven and allowed just one run and six hits.

Gray Collegiate (20-4) will play host to Crescent, a 3-1 winner over Batesburg-Leesville in the District One final. Lacy Dubose had two hits and Riley Bouknight drove in the Lady Panthers' lone run in the seventh inning on a RBI fielder's choice. — Thomas Grant Jr.

The White Knoll softball program has been the most successful sports team at the school, notching a state championship in 2018.

On Wednesday evening on their home field, the team’s 2022 season came to an end after losing twice to the Summerville Lady Green Wave in the Class 5A District Eight final.

In the first game, the Lady Timberwolves were not able to generate any offense. A two-run homer capped Summerville’s scoring in the 8-0 victory.

With a deciding game needed, White Knoll was the road team. Summerville repeated its fast start from the first game with a two-run homer in the bottom of the first, but neither team could add to their total over the next four innings.

In the fifth inning, senior Lexi Winters injected new life into the Lady Timberwolves’ offense. After a couple of singles, she drilled a two-out, three-run home run to the left field fence to put White Knoll up 3-2.

The Lady Green Wave quieted the crowd quickly in the bottom of the fifth, however, with a one-out two-run home run to regain the lead at 4-3.

In the sixth inning, confusion in the batting order resulted in White Knoll sending the wrong batter to the plate. Instead of a single that would have put two runners on base, the Lady Timberwolves were charged with an out and left with a single baserunner.

A walk put a second runner on base, but pinch hitter Kiera Motley struck out to end the half inning.

Summerville loaded the bases in the bottom of the sixth, but were held scoreless.

Winters came up to bat with two outs, but was intentionally walked. The final Lady Timberwolves batter struck out to end the game.

The first season of varsity girls soccer ended with a second-round loss for the Lady Crusaders to the defending SCISA Class 2A champions.  — Thomas Grant Jr.