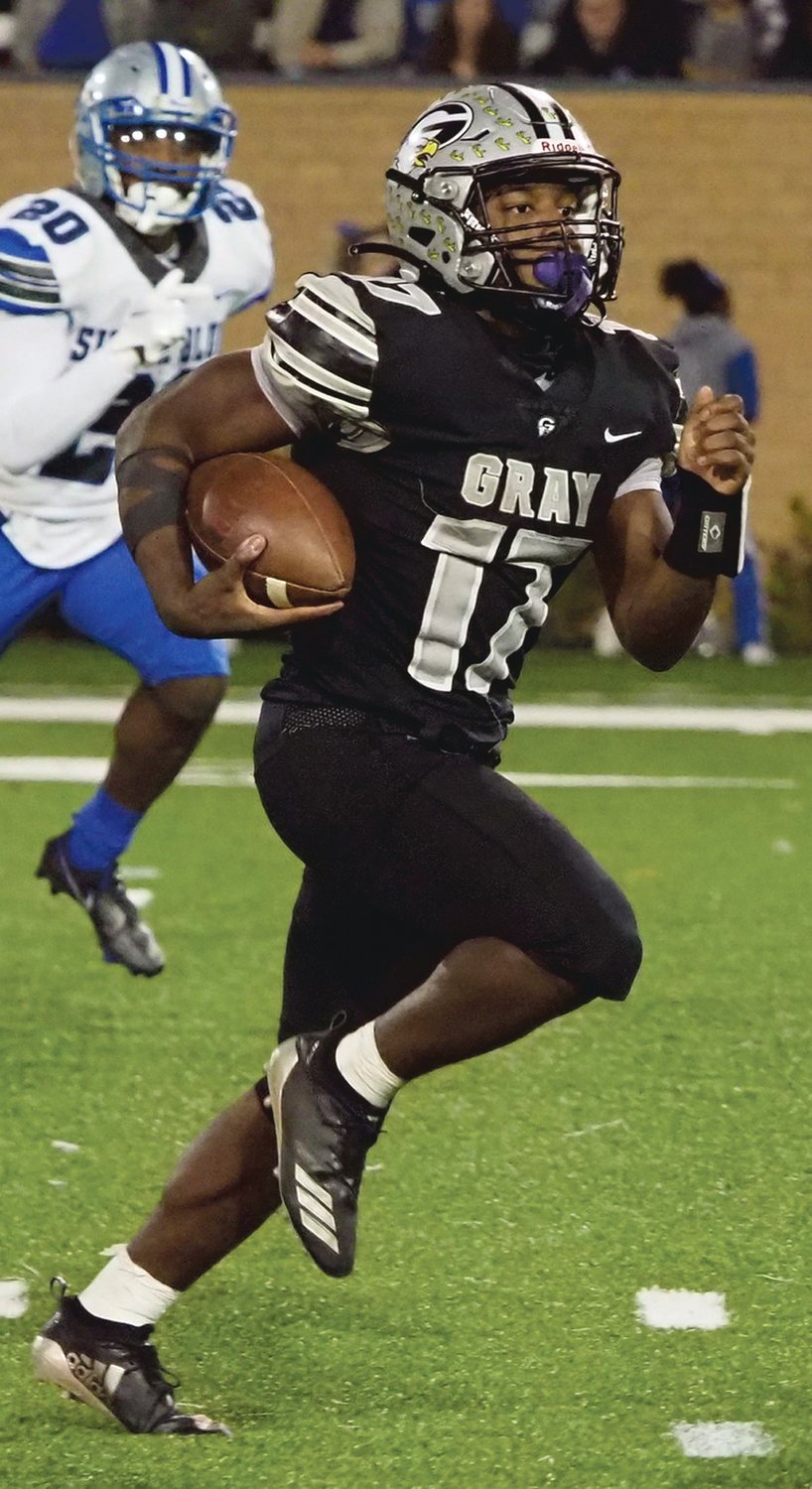 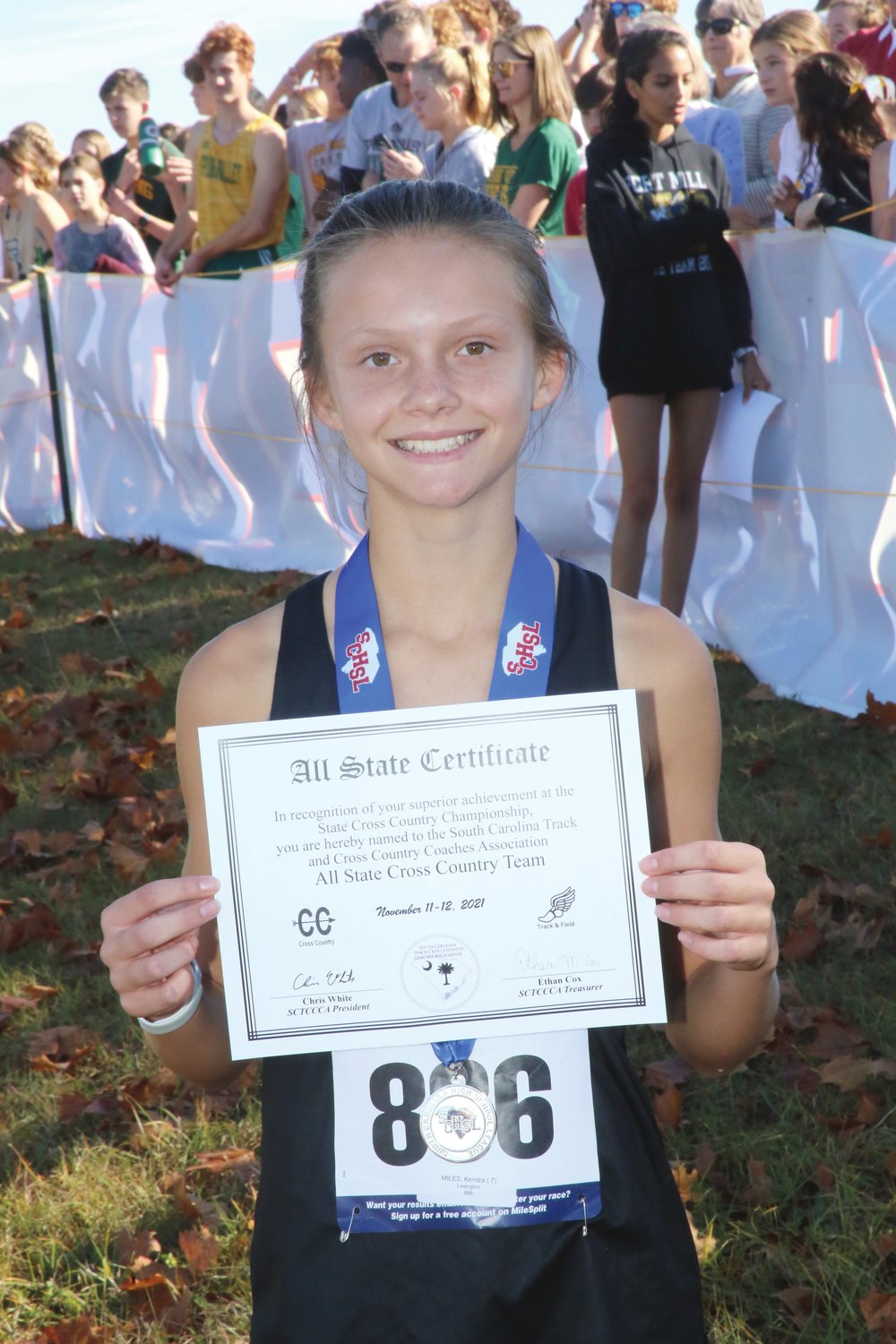 A record-setting state championship running back.

A seventh-grade cross-country and state championship track and field runner.

The trio are the Lexington Chronicle's Athletes of the Year for the 2021-22 school year:

Male Co-Athletes of the Year

For four seasons, Adams has provided some of the top highlight plays in South Carolina High School football on Friday nights.

This past season, the now-Georgia State freshman entered unchartered territory both for himself and his War Eagles' football team.

In leading Gray Collegiate to a 14-1 record, the Region 3-2A, Class 2A Upper State and first-ever state title, Adams rushed for the most yards ever by the South Carolina high school player. His 3,387 yards eclipsed the previous mark set by former Lexington great Demetris Summers to go with 42 touchdowns (40 rushing) on offense and 60 tackles, four interceptions and three fumble recoveries from the defensive back position.

“I think he is the epitome of what Mr. Football is,” said Adam Holmes, Gray Collegiate’s head football coach, when Adams was named a finalist for the award. “He is putting up record-breaking numbers rushing, while playing every down of defense. The most selfless player I have ever coached."

Making Adams' numbers even more impressive was the level of competition the War Eagles faced on a weekly basis. The list of opponents included Class 5A champion Gaffney, Class 2A and Class 3A finalists Silver Bluff and Camden, Class 2A Lower State finalist Newberry and Upper and Lower State semifinalists Ridge View, Abbeville and Oceanside Collegiate.

“He is just one of the dynamic players I’ve ever played against for years,” said Abbeville head coach Jamie Nickles after his then-defending state champions lost 31-15 to Gray Collegiate in the third round of the Class 2A Upper State playoffs. “We’ve been fortunate to win a few of those, but just hats off to him. I wish him the best in his college career (Adams is committed to Georgia State) because he’s a special football player.”

“I’ll be honest with you. I’ll go on record and say he’s probably the best football player I’ve ever coached against,” said Silver Bluff head coach and former White Knoll assistant De'Angelo Bryant following the 49-14 loss in the state title game. “I think a lot of the other coaches in this state would probably say the same thing.

"He’s a dynamic football player, a great young man. He’s got a bright future doing something. Football’s one and he’ll do something else."

Being a multi-sport athlete is a family tradition in the Osmanski household.

Following in the footsteps of older brother Michael, Jacob managed to excel in three different sports over the past school year.

A free safety and wide receiver, Osmanski helped the Panthers make back-to-back Class 2A playoff appearances to wrap up his gridiron career. His efforts earned Osmanski a spot of the S.C. Football Coaches Association's Class 2A All-State team as an athlete.

He enjoyed his most athletic success this past year in wrestling. In February, Osmanski won the Class 2A title at 160 pounds, just the second state champion in school history.

"Jacob Osmanski is the type of athlete that comes through school only every so often,” Pelion wrestling coach Russell Truesdale said. “He is a student of the game, whatever game he is playing. He is extremely coachable and has a strong competitive edge. He doesn't like to lose, and his work ethic ensures he will always be able to give a maximum effort. He was a leader, both on and off the wrestling mat, and will be missed at Pelion High School.”

There was little rest time for Osmanski as he turned his attention to track and field. A team leader in the shot put and runner on the 4x100 meter relay team, Osmanski broke the state record twice this year in the 110-meter hurdles.

He qualified for the S.C. High School League track and field championships, placing first at the Lower State in both the 400 meters and 110-meter hurdles. Osmanski placed third in the latter event for his third All-State honor earned as a senior.

"Coaching Jacob the last 4 years has been both an honor and a privilege," Pelion Track and Field coach Mark Bedenbaugh said. "He has been the type of athlete that can not only change the outlook of a team but can change the culture of a program.

"We have been blessed to have had very good athletes as a part of the track program over the years, but I would rate Jacob right at the top of the list. He has been very versatile in his events although the 110 hurdles were his specialty. He also was one of our better Shot Putters- a combination not usually found in high school athletes.

"His work ethic, team spirit and all-around athleticism has been something that has made him special to coach. I have no doubt he will have continued success as he moves forward with his college career."

Osmanski will attend Columbia International University in the fall.

Female Athlete of the Year

With Airport's Jayla Jamison now at the University of South Carolina, a spot was open for the next standout track and field female athlete in Chronicle Country.

"Kendra is one of the most talented and hardworking athletes I have coached," Lexington Track and Field Coach Tanner Graham said. "She did not miss a single day of summer conditioning last year and was always striving to improve herself, and her teammates.

"She is the ultimate teammate by pushing the pace and encouraging those around her to get better."

During the fall, Miles won the Lake Murray Invitational and broke the school record at the Region 5-5A cross-country championships.

It turns out Miles was only getting started. A few weeks later, she finished runner-up and helped the Lady Wildcats place second in Class 5A at the S.C. High School League Cross-Country championships for the second straight year.

“The thing about her is, she is not experienced to be nervous,” Lexington coach Tanner Graham said. “I knew last year she was coming into the program, and we were going to get her. However, I didn’t expect her to do quite what she has been able to do this year.”

Once the spring arrived, Miles continued to rewrite the Lexington record book. She set new marks for the 1,600 and 3,200 meters, winning first and second, respectively, at the S.C. High School League Track and Field championships.

"Kendra is truly a joy to coach," Graham said. "Her silliness and goofy personality make everyone around her laugh and make coaching her fun."