Lexington-Richland School District 5’s Board of Trustees deferred a vote this week on a potential bond referendum to fund several improvements. 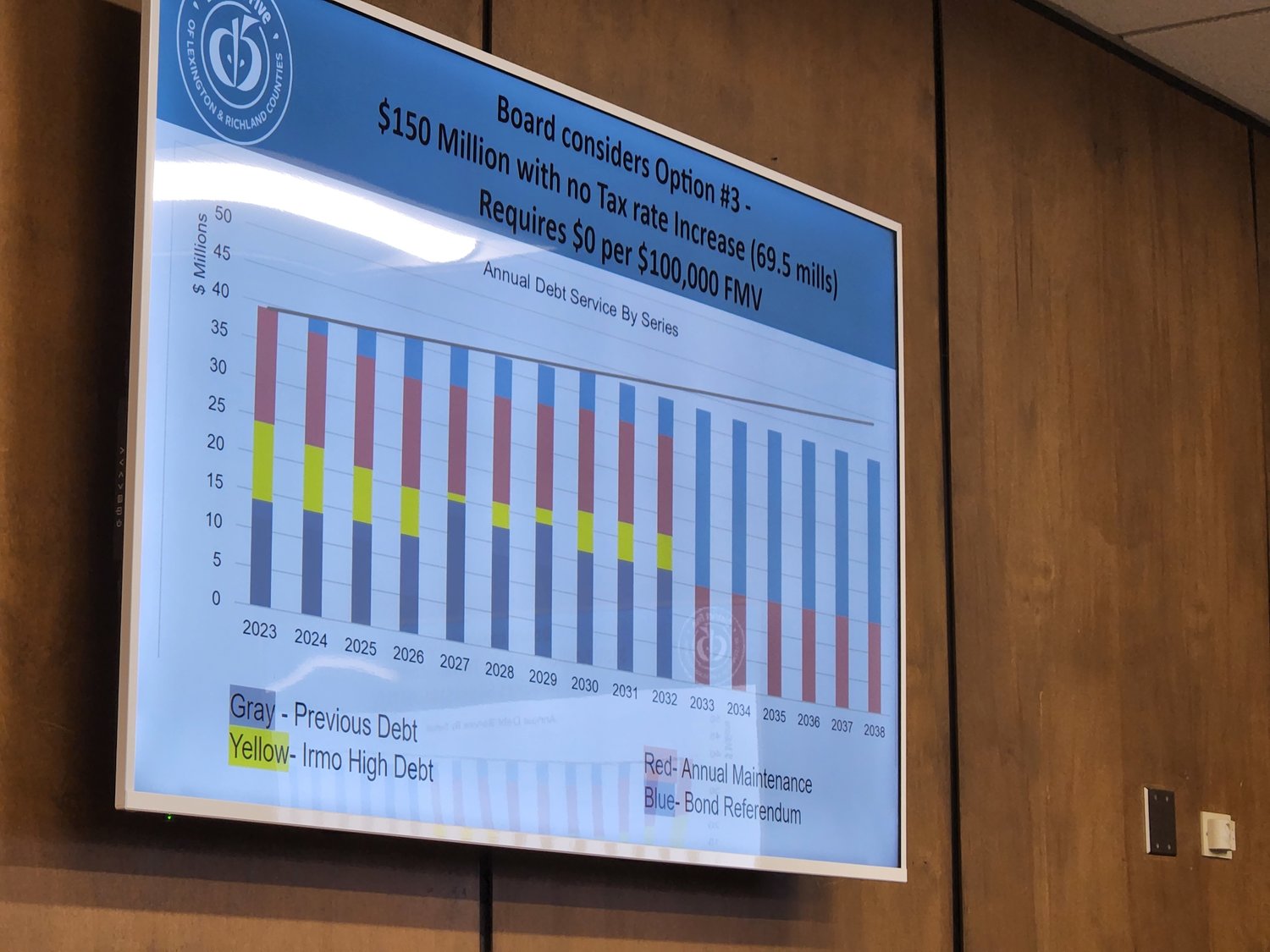 Lexington-Richland School District 5’s Board of Trustees deferred a vote this week on a potential bond referendum to fund several improvements.

The $150 million bond, which the board has been considering for a few months, would finance upgrades or replacements for many of the district’s older facilities. Most of the buildings are in the Irmo and Dutch Fork areas and included Dutch Fork Middle’s sixth grade academy, Irmo Middle’s  sixth grade academy, CrossRoads Intermediate (set for a remodel), a new Dutch Fork Elementary School, Nursery Road Elementary (set for a remodel), Harbison West Elementary’s early childhood education center, Dutch Fork and Irmo High stadium renovations.

The referendum would not require a property tax increase.

If approved by the board, voters would have the final say on whether the bond is approved. Due to the board’s deferral at its Aug. 8 meeting, the bond referendum will most likely not be on this year’s ballot.

Other renovations tied to the bond include security upgrades for all schools, a robotics lab, Chapin High’s fine arts building and the alternative education building.

Separate from the referendum approval, Irmo High is already approved for a nearly $50 million facelift, including the replacement of its east wing.

Board member Catherine Huddle made the motion to defer the bond referendum vote until more information could be attained. The motion passed 5-2.

Huddle made the motion after hearing Superintendent Akil Ross discuss the projects and also after hearing Jay Glover from PFM Financial Advisors speak about the finances and millage. While Huddle and the rest of the board members agreed upon the necessity of most of the projects, there were many questions about the costs, rising inflation and lack of results from the most recent procurement audit. Huddle said she would like to have the results of the audit first before making a major decision about the referendum.

The board is set to discuss the audit at a special called meeting on Sept. 19.

Board Member Tifani Moore said she saw concern with having the sixth grade wings placed ahead of the elementary schools and other issues with the order and importance of projects.

Ross said that the reason for working on the sixth grade wings first is they simply cannot work on the elementary schools while students are in class.

Hammond said if all board members are not on the same page, there is a good chance the bond referendum won’t pass with voters.

When asked, Glover said deferring the vote would require minor changes in the financing plan.

Security Solutions of America will provide the security team until the SROs can take over. There will be one per security officer per campus.

There will also be metal detector screenings at the exterior doors for any visitors who enter distinct schools. This will also apply to parents dropping off kids, but will not apply to students.

“This is another level of screening of protection,” said Ross. “Parents are informed that they will need to go through the screening.”

Ross received a performance review from the board at the Aug. 8 meeting, with the board unanimously deeming that he has done an exceptional job and extending his contract through June 30, 2026.

Ross received praise from board members for being willing to work with everyone at the district. Huddle particularly lauded his ability to interface successfully with teachers, staff, parents and the board.

Board Chair Jan Hammond said the board met on July 11 to evaluate Ross’ performance in five primary areas, which included governance, community relations, staff relations, business and finance, and leadership.

Hammond said what really impressed the board were Ross’ accessibility and innovative values. She added that his leadership is inspiring, as he has taken charge of the district at a difficult time.

In regards to COVID-19, all schools will open on a green according to the District’s dashboard. Green is the second-lowest of the district’s five COVID levels, indicating that schools are open with low mitigation protocols. There are five ranges on the District 5’s dashboard with blue being the lowest with no mitigation and red, the highest, indicating that buildings are closed and students are in distance learning.

Ross proposed a Good News Program at the Aug. 8 meeting, hoping to highlight positive stories at the district. Under the program, a $1,500 FTE stipend would be given to one staff member or teacher per school for telling his or her story. The principal or director chooses the person whose story would be highlighted via social media. The board passed the motion 6-1.