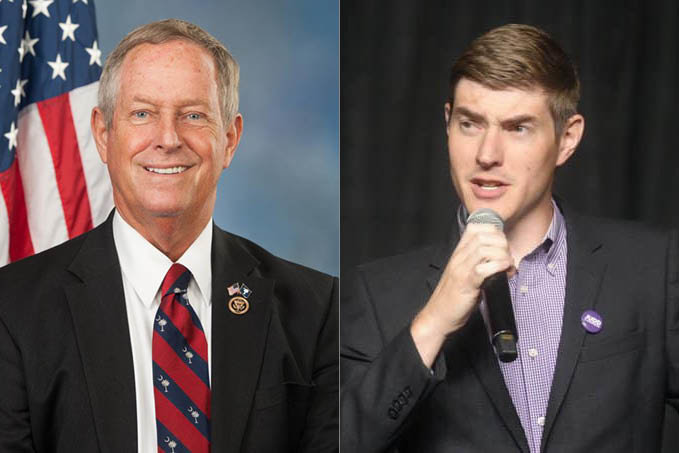 The Chronicle has assembled a guide to what will be on ballots in Lexington County in the November election. Find the full guide at lexingtonchronicle.com.

Judd Larkins, the challenger in the race to represent S.C. District 2 in the U.S. House of Representatives, grew up in a two-stoplight town in rural South Carolina, which is where he told the Chronicle he gained motivation to run for Congressman and change the lack of meaningful action from Washington.

This is Larkins’ first run for political office, and during the race he said his biggest challenge has been attempting to get people to look past the party position and look at the individual – and focus on getting things done for communities and finding allies on those issues and not separating into teams based on political parties.

“I always stress to evaluate each candidate on their own terms and not through a blue or red lense,” he said.

If elected, Larkins said his top priority would be securing the future for young and older generations at every stage of life. That means addressing issues such as cost of living and inflation. Larkins sees himself as a voice to help close the divide between the Midlands and Washington.

Larkins said a good member of congress must be plugged into the needs of their district. He mentioned that this can only be done by regularly attending community events that bring out a diverse crowd, rather than those only associated with a particular party or cause. He said he has attended multiple community events through the years, with his favorite being National Night Out. He also likes to attend and support health-based events, since he lost his mother to breast cancer.

“I have really enjoyed meeting people from all walks of life and from every corner of the district,” he said. “I’m always the happiest when I’m out at a community event or trying a local restaurant.”

Larkins said small rural communities that are located across the Midlands are quintessential South Carolina and should be given the tools and resources they need instead of being used as political pawns.

The candidate told the Chronicle that he stands out from Joe Wilson with his young, rural and fresh voice for the district. By growing up in a time where technology is often evolving, he said he’s been able to see the impact it has on small towns and businesses.

Republican Joe Wilson, a 31-year Army veteran, said he was inspired by his mother who was a pioneer republican campaigning for Dwight D. Eisenhower. He has served in the U.S. House of Representatives since 2001.

Wilson told the Chronicle one of the major issues that he would like to address moving forward in Congress is “Bidenflation,” which he said is crippling to American families.

“[President Joe Biden’s] war on energy raising gas prices, and his tax, borrowing, and spending policy [is] mortgaging the future of young Americans as he undermines the value of the American dollar of all ages,” he said.

If re-elected, Wilson’s top priority would be to promote job creation to address domestic issues and support “peace through strength” of military power. His goal is to restore stabillity in the world and deter Russian President Vladimir Putin, the Chinese Communist Party, the terrorists of Iran, and global terrorism.

When asked what it takes to be a good member of congress, Wilson said they must be accessible, accountable and have an enthusiastic commitment to service.

In Congress, Wilson sees himself continuing together with his constituents and collegues of both parties to promote limited government and expanded freedom.

When asked on how he stands out from opponent Judd Larkins, Wilson told the Chronicle that he does not comment on opponents in a campaign as he recognizes that they have every right to run.