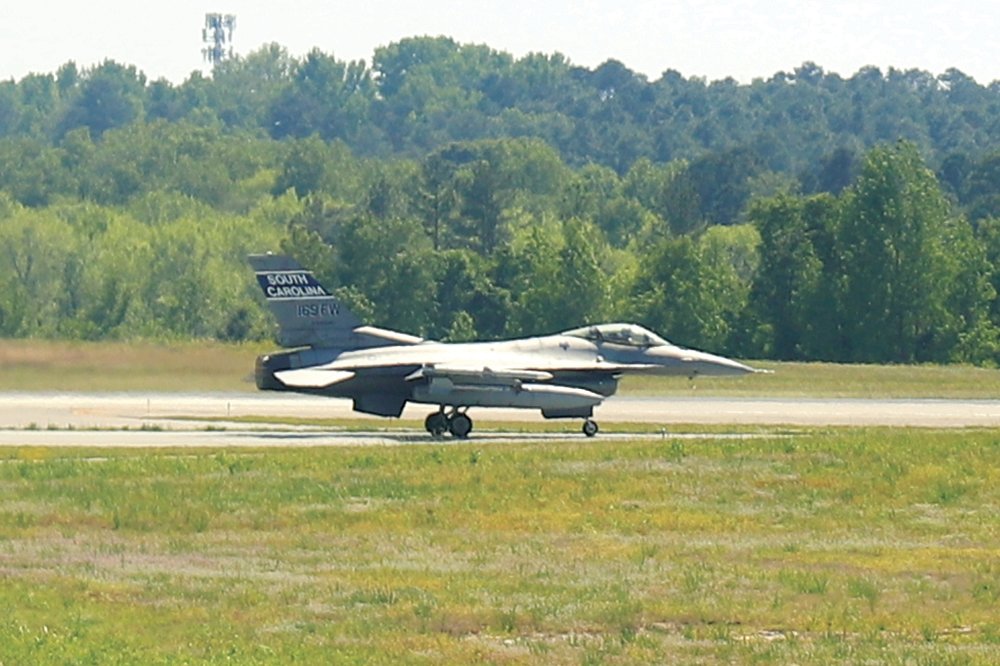 They have arrived. Or, more accurately, roughly one third of them have.

On April 27, the first F-16s temporarily relocating from McEntire Joint National Guard Base near Hopkins and Eastover to the Columbia Metropolitan Airport in West Columbia made the short trip to their temporary home.

The Air National Guard’s F-16 operations at McEntire are moving to Lexington County as the base gets ready to resurface its F-16 runway.

“During this first mission, roughly one third of the F-16 fleet will arrive at CAE,” Kim Crafton, the airport’s director of marketing and air service development wrote in a media release. “In the coming weeks, the remaining aircraft will follow suit and be onsite at CAE for roughly six months.”

The airport will soon establish a viewing area for the public hoping to glimpse the fighters taking off and landing, likely at or near the Cell Phone Waiting Lot. Previous releases noted that parking for viewing the F-16s will not be allowed on the side of the road near the airport or in unauthorized areas.

And there will be a good deal of flying for local residents to witness.

“While the 169th Fighter Wing is temporarily located at the Columbia Metropolitan Airport, we will be conducting our normal flight training operations just as if we were back here at McEntire Joint National Guard Base,” said Lt. Col. Jim St. Clair, who handles public affairs for the wing.

“What that means is that on most work days, as well as on our normal one weekend a month drill weekend, we will be launching and recovering several training sorties most mornings and most afternoons. A number of factors will influence this including our training schedule, weather and so on.”

But knowing exactly when to show up to see the F-16s might be a little tricky.

“For operational security reasons, we don’t publish a releasable schedule of flights,” he said, adding that flight training operations should commence sometime this week.

The airport previously warned that air traffic noise levels may increase while the F-16s are operating out of West Columbia, though the 169th Fighter Wing assured that it is taking every realistic and safe measure to reduce any potential disruptions to the surrounding area.